We went to see Game, Mike Bartlett's new play, on at The Almeida Theatre.  (He of the recently much acclaimed Charles III, which also premiered at The Almeida).  I hadn't been to that theatre for years, in fact, since before its big refurbishment when I lived in London in the late Nineties.

It still had the same vibe and the foyer was full of the sort of audience seeking out brave, experimental theatre experiences.  Game was certainly that! 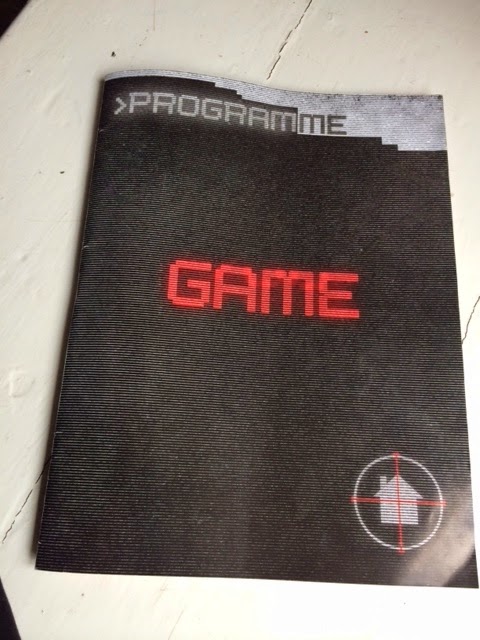 The audience were led into the theatre in groups and placed in separate zones, some seated on benches, some standing.  The zones were separated from each other.  We were clearly in some sort of viewing 'hide' and were each given a set of headphones to wear.  When the play started, the 'hide' screens in front of each zone rolled up to let us see the action through one way mirrors while, simultaneously, television monitors played other sequences being performed out of our vision.

A dystopian tale played out over the next hour about what happens when a young couple and their child make a repugnant deal in exchange for a roof over their heads.  It's about the un-affordablilty of housing and what could happen in a divided society of very rich and very poor with the extreme lost habits and mores of the Big Brother legacy.   Very bleak and unforgiving.  Wearing our headphones and unable to see the rest of the audience gave each of us an intense and personal experience watching the sickening events play out.

The technical production, staging and mixed media was amazingly slick and intelligent.
Most shocking - was a few of the audience members finding some sequences funny  - a case of nervous laughter I hope, or we're nearer than we think to a fresh hell.